END_OF_DOCUMENT_TOKEN_TO_BE_REPLACED

Kumaraswamy PR. Reading the Silence: India and the Arab Spring. 2012. 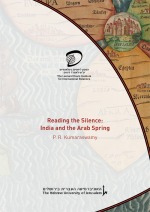 Absrtact
High political, economic, and energy stakes conditioned India’s nuanced response to the Arab Spring. Proud of its diversity, India’s foreign policy agenda has never been democracy promotion, and India was prepared to accept the choice of the Arab people to determine their leaders and political system within the norms of their respective societies. The geographically proximate region, especially the Persian Gulf, is vital for India. Hence, other than evacuation of its nationals, India’s reactions to the Arab Spring have been few and far between. And even these responses have been measured, underscoring Indian reluctance to take any stand. India has been extremely cautious about the developments in the Persian Gulf, hoping that the ruling regimes would survive. Given the presence of about six million Indian expatriate workers in the Gulf countries, India’s studied silence—rather than being a sign of indifference towards popular sentiments or an endorsement of the authoritarian regimes—was the only option available for India. It was a reflection both of its crucial interests in the region and of its preference for stable and internally viable political states in the region.  Thus, economic interests, more than political calculations, have determined India’s post-Cold War Middle East policies—a fact visibly demonstrated following the Arab Spring. India’s traditional reluctance to make democracy promotion a principal foreign policy objective also played into this relegation of political considerations. The muted and calibrated Indian reactions to the Arab Spring challenge the hopes for an assertive India in the international scene.  At a macro level, India’s calculated and interest-driven positions during the Arab Spring are also a sign that its aspirations for great power status will be through consensus and accommodation rather than by taking a leadership role—that is, through measured steps, not aggressive public statements. This is the irony of the "self-appointed frontrunner for the UNSC.”
Last updated on 03/27/2018