END_OF_DOCUMENT_TOKEN_TO_BE_REPLACED

Kartin A. The Dilemma of Administering Immigration Policies in Countries with Ongoing Ethnic-National-Religious Conflicts. POLITIKA. 2013;22. 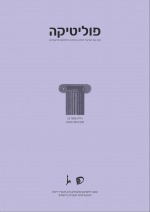 An intrastate conflict between ethnic-national-religious identity communities – one whose focus is each one’s aspiration to make its mark on the nature of the state and its character – positions the state’s decision makers before a difficult deliberation in shaping immigration policy, if they wish to adhere to liberal principles. The policy dilemma is exacerbated when the government also faces a certain tension: on one hand, the country has a duty to protect the rights of its citizens to bring a foreign partner with whom they wish to start a family into its gates; on the other, the state may be concerned that giving a sweeping permit for the entry of marriage immigrants will accelerate the process of eroding the majority’s demographic advantage and have negative political ramifications.
Against the backdrop of this dilemma, the article discusses the question of justifying the integration of demographic considerations in immigration policy for divided countries, focusing on Israel as a test case.